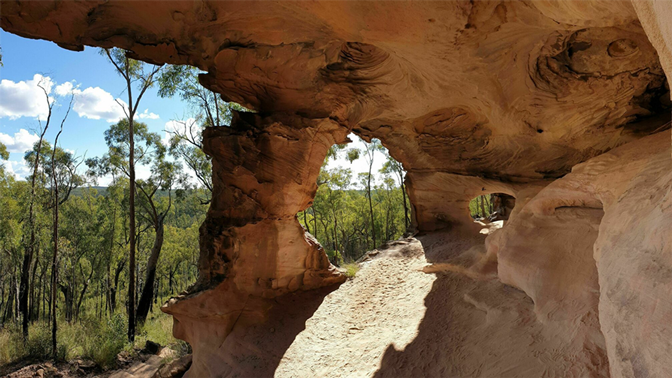 The Pilliga region is a vast woodland expanse of alluvial plains with outcrops of sandstone and conglomerate rocks that date back to the Jurassic and Triassic ages.

To the south, the landscape rises towards the volcanic features of the Warrumbungles, then becomes characterised by low escarpments and ridge mosaics. Creeks drain north to north-west to eventually join the Namoi River.

The Pilliga ‘Scrub’, which provides an intact link between the Warrumbungles and Mt Kaputar National Park, extends over 840,000 hectares and is the largest remaining area of continuous semi-arid woodland in temperate eastern Australia. It includes three protected wilderness areas: the Timmallallie Wilderness of 26,082 hectares, the Gamilaroi Wilderness of 30,088 hectares and the Willala Wilderness of 73,734 hectares.

In 2009, the Federal Government’s environment department identified the Pilliga as a Biodiversity Hotspot, one of only fifteen in Australia, making it a must-see for people who love to explore Australia's wild places.

The most notable feature of the area’s fauna, the rare Pilliga Mouse, was only discovered in 1975. Like the Eastern Pygmy-possum, expect to find this marsupial inhabiting woodland areas with dense shrub layers.

The Pilliga is also home to the Brush-tailed Rock-wallaby, Rufous Bettong, Black-striped Wallaby and Pale-headed Snake. Over 200 bird species have been recorded in the Pilliga forests with the area providing habitat for almost a third of all Australian parrot and cockatoo species.

A once healthy large Koala population is now in rapid decline and the state of the Pilliga's threatened Squirrel Glider populations is unknown. There are 22 threatened fauna species known to inhabit this rugged land, including the Swift Parrot, Mallee Fowl, Glossy Black Cockatoo, Turquoise Parrot and Regent Honeyeater.

The woodlands are dominated by stands of Black Cypress and Narrow-leaved Iron Bark, with some representation of boxes, gums, angophoras and bloodwoods. On stony ridges, Broadleaved Ironbark becomes dominant, along with E. dealbata and Cypress, while the creeklines feature a dominance of angophoras.

The woodlands are dotted with heathlands dominated by Melaleuca Uncinata. Research in 1991 (Norris et al.) indicated that the area’s woodland associations and canopy densities had not changed substantially since European settlement, with much of the Pilliga Nature Reserve in old growth condition.

The Pilliga Forest is in the heart of the Gamilaraay (Kamilaroi/Gomeroi) nation and is above one of the few areas known to provide groundwater to the Great Artesian Basin. Rainwater falling in the forest is thought to spread westwards through aquifers underground to feed much of the Basin.

Water originating from below the ground is deemed spiritually significant for Aboriginal people. According to the ‘Burruguu’ - or Dreamtime stories - of the Gamiliraay, for example, the underground waterways forming the basin were created by a giant crocodile, who sleeps in their Country to this day. If he is woken up, all hell will break loose.

For tens of millennia, groundwater sources have been playing a role in a variety of social activities including trade, dispute resolution and ceremonies like male initiation and marriage. Soaks or native wells - that is, places where groundwater discharges to the surface - have also been used by the Gamiliraay people for cleansing ceremonies.

Even though the Pilliga is a high conservation area, its flora, fauna and water are now endangered by industrial Coal Seam Gas (CSG) development. In September 2020, the NSW Governments’  Independent Planning Commission (IPC) approved Santos’ proposal to build 850 coal seam gas wells in the Pilliga region.

Dewatering is needed to produce coal seam gas. So, as some critics have argued, shallow groundwater aquifers, which are crucial for domestic and agricultural water supplies, could be contaminated or run dry due to fracking.

When groundwater systems are interfered with, large impacts are usually not reported by the company, even if obvious.

Often they are only reported once the aquifer ‘bleeds out’, and complaints have been made. It may take decades to uncover any groundwater damage from CSG mining, and by then it may be too late.

Let's hope the only thing in the water is that sleeping, giant crocodile.