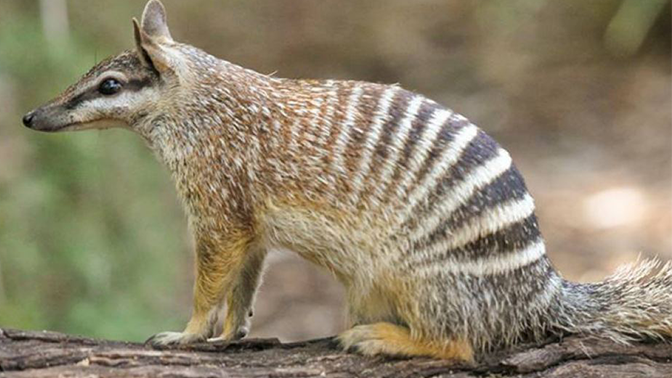 Spotlight on the Numbat

Spotlight on the Numbat

The Numbat is a marsupial that mainly inhabits arid and semi-arid environments. You would expect to find them in eucalypt forest, eucalypt woodland, acacia woodlands and triodia grasslands; temperate areas with enough ground cover for these mammals to move about without being easily spotted by snakes, goannas and birds of prey – their natural predators.

Growing to about 43cm from the tip of their nose to the end of their fluffy tail, they have squat bodies, pointy heads with long noses, and rusty-orange and grey-black coats, with distinctive white stripes running transverse across their lower back.

Formerly widespread in southern parts of Western Australia, South Australia, parts of New South Wales, Victoria and the Northern Territory, only two naturally occurring populations are known to remain today. They are located at Dryandra Woodlands, near Narrogin, and Perup Nature Reserve, near Manjimup.

Though it’s sometimes called the Banded Anteater, the Numbat does not consume ants as part of its diet. From infancy to adulthood, this diurnal (active by day) marsupial feeds exclusively on termites; with adults consuming a whopping 15,000 - 20,000 termites per day!

Typically solitary animals, adults tend to associate with each other only during mating season (December to January) and when raising their offspring. Building homes in burrows or in the hollow of wandoo logs – a species of tree favoured by termites –, the female births four offspring a year.

Mothers suckle their young with milk for 8-9 months, with children becoming independent when 12 months old. This is also the age at which females reach sexual maturity, while males begin to mate at the age of 24 months; the latter taking multiple sexual partners each year, while the former takes a different mate from year to year.

By the late 1970s, the Numbat was already thought to be facing extinction. With only 1,000 mature adults living in the wild today, the IUCN lists the Numbat as an endangered species.

On the one hand, predation by pests like the Red Fox and feral cats is thought to have fuelled the decline of Numbat populations around the country. Unlike the native reptiles and birds that feed upon this species, the Numbat has not evolved in Australia to escape or avoid the detection of these introduced pests.

On the other, changed fire regimes and habitat destruction have worked together to reduce the number of logs that Numbats rely on for shelter, refuge from predators, and as a source of termites (the base of their diet).

To ensure that the Numbat does not become extinct, breeding programs have been established by organisations like the Australian Wildlife Conservancy, who are in turn re-introducing the species into large, protected and fenced off sanctuaries like the one found at Mount Gibson, Western Australia.

As a ‘keystone species’, the presence or absence of Numbats in the wild strongly affects populations of other plant and animal species.

Unchecked by their natural predators, for example, termite populations are surely growing at those locations where natural populations of the Numbat were once found. So, it goes without saying that our native eucalypt forests and woodlands are more vulnerable now.

In turn, remnant communities of other threatened, native animals co-inhabiting these areas are also affected, meaning the situation has only grown more dire for the Woylie, the Western Quoll and the Western Ringtail Possum.

Indeed, breeding programs aimed at preventing the extinction of the Numbat are necessary. Yet, as Numbats play a vital role in maintaining our native woodlands, they present only partial solutions to the deeper, ecological problems posed by the disappearance of this species in the wild.

In the end, the greatest hope we have of protecting the Numbat – as well as the plant and animal species relying on it – lies in keeping our wild landscapes safe, healthy and resilient.